"He likes to think he's a voice for his people. Perhaps he was, long ago."

The Pride of Prince Papyrus

Prince Papyrus is the second major character encountered in Storyshift.

Prince Papyrus is a tall skeleton monster clad in royal uniform, complete with Delta Rune-emblazoned robes, epaulettes, and boots. Despite being a skeleton, his facial structure allows him to show off a variety of facial expressions through his "eyebrows," "smile," and occasional googly eyeballs.

From the beginning, Prince Papyrus is shown to be extremely charismatic and pompous, yet kind and considerate towards others. While seemingly more mature than his Undertale counterpart, he still retains his goofy personality.

While protective of Frisk, by no means does he hold their hand the entire time. Instead, he eventually allows them to find their own way throughout Old Home, and choose their own path.

Prince Papyrus is introduced rescuing Frisk from Boogie. Trapping the flower in a cage of bones, he scolds them for "causing trouble again," before turning towards Frisk and expressing surprise at the arrival of a new human in the Underground.

After introducing himself, Papyrus guides Frisk through the first few puzzle rooms in Old Home. He completes the first puzzle (a simple XO puzzle often seen in Snowdin in the original game) as a demonstration of how they work and informs Frisk of their historical significance. To his dismay, he forgot to reset the second puzzle (consisting of a lowered drawbridge and five levers) and thus summons a wall of bones to block the exit, allowing Frisk to complete the puzzle as intended.

For his next test, Papyrus brings Frisk to face the Dummy and instructs them to end the battle without resorting to violence. Depending on how Frisk handles the encounter, Papyrus will react with pleasure if they spare the Dummy, dismay if they fight or run away or outrage if they intentionally miss four attacks, causing the Dummy to faint in terror.

After crossing the ''Puzzler's Path'' or the ''Warrior's Path'' Papyrus has confidence in their independence and won’t hold their hand through Old Home (Unless the player deliberately calls him, he won’t be in contact with Frisk until they rejoin).

Following Papyrus, he leads you over to the room south and right into the Home's Heart ,where it leaves you to have a conversation with the inhabitants. Arriving to his house he reveals them a plate full of ravioli, after that he ''says goodbye'' to Frisk for show them his ''final test''.

After ACTing a lot, he tells you about how his daughter Justine died at the hands of the Solar Warriors until he Believes in Frisk and yields to be forgiven.

If Frisk back to the Home's Heart, next to his statue he will mention his friend Mettacrit.

The Prince and his statue.

Papyrus believes in you

The past of Papyrus 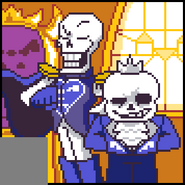 Papyrus in his royal regalia with his brother

Community content is available under CC-BY-SA unless otherwise noted.
Advertisement